The idea of this project was to recreate an existing game/art piece named Townscaper. This game uses procedural block placements on an irregular grid to create a really cool looking town with lots of variation. I knew that this was a bit too much for my own project so I decided to recreate an earlier version of townscaper named Brick Block. This version is based on a square grid where each ‘block’ has 6 sides(Stålberg, O. S., 2015).

I had bigger things in mind at the start of the project but I noticed that what i wanted to do was harder than i thought. I wanted to make the code be useable outside of my own project as a library or a unity asset but before I can do that I need to have it working first.

Try out my project in the browser:

Look at my code here:

Before I started coding I wanted to think about the code structure and how I will build up the project. From the example I am trying to recreate I know that I need a grid with big blocks. Each big block will contain eight smaller blocks inside it. Each big block needs to know what neighbors it has and I need to be able to add and remove big blocks from the grid which should update the neighboring big blocks of the added or removed big block.

To store the coordinates of all cells and the cell data itself I chose to use a Dictionary. The benefits of a dictionary is that I can lookup the keys which in this case is an integer vector3 really quickly and I can check if a certain coordinate already exist in the dictionary really quick.

Now that I have a coordinate system to which I can add coordinates and cells I can start with the placement of cells. I want to place cells with a left mouse click and remove them with a right mouse click. To know where the mouse is pointing at in the 3D environment I use ray casts. Using unity’s build-in ray cast functions I can shoot a ray from the mouse position into 3D environment possibly hitting an object (Unity. z.d.).

Now that I have the position of where the new block will be created, I can start adding and creating this data. I need to create a new Cell object, add to the cells dictionary and create actual object in the 3D environment. But before that I need to check if the position of the new cell is not outside of the range I want it to be and if it does not already exist in the dictionary. This is where the use of a dictionary helps a lot because I can use the ‘ContainsKey’ function to check if cell already exists or is outside of the bounds.

Now that I know that I have a valid position I can create the Cell object. This object needs a position, scale, prefabs and a Boolean to set it as a ground cell or not.

With having made the cell and all the cellblocks I can then add this cell to the dictionary as value with the key being the coordinate. I then update all existing cells and create a cube for each cell in the dictionary.

The collider cubes position and scale is determined by coordinate position and the given scale. The eight prefab positions of the cellblocks are all already set and only need to be assigned.

Destroying already created cubes is much simpler, this function checks if there exists a cell on the given coordinate and checks if this cell is not a ground cell and then removes it from the dictionary. Then it destroys the parent collider cube with all its cellblock children. It then updates all other blocks.

Now that it is possible to add and remove cells I want to know what cells neighbor each other. I know that each cell can have at most 6 neighbors. I can use an array to store the neighbors coordinates for this reason. I can check if a cell has a neighbor in a particular direction by using the handy ‘ContainsKey’ function of dictionaries. And because the coordinate system has each cell be exactly one unit away from each other cell I know exactly where the possible neighbor would be in the coordinate system. To add all the neighbors to each cell I loop over each cell in the cells dictionary and check for all six sides if it there exists another cell. If this is not the case then I set that neighbor position in the array to ‘null’.

With the all the neighbors known I can now calculate which configuration all the cellblocks of the cell need to be in to connect properly to the neighboring cells. With six neighbours that can exist or not there are two to the power of six possible combinations or 64 combinations. To get an usable number out of the configurations I can use binary notation. Where each neighboring side is a different bit out of a 6 bit binary number. A Cell with neighbors in array position zero, two and five would be binary 010101 and converted to decimal 0,1,0,4,0,16,0 summed up to 21. The number 21 can then be used to know what exact configuration is being used.

This is the point where I did not know how to proceed. I had my coordinate system, my way of filling a dictionary with the relevant data and I knew in what configuration the neighbors of each cell stood. There is an algorithm named the wave function collapse algorithm that can be used to algorithmically solve how each configuration of neighbors should look, but I did not understand this algorithm well enough to implement it in this project(Heaton, R. H.,2018).

I wanted the camera to be able to rotate around the building by clicking the left or right side of the screen in a somewhat smooth way. To align the camera in the right direction and on the right position I first need to calculate the middle point of ground blocks. Using this middle point I can calculate how much the camera should be offset from this point.

I chose to have eight different camera points, on each corner and in the middle of each side. The X and Z values of the positions of the camera are calculated by taking the middle point and adding or subtracting an offset from this. The Y value for all camera positions is the same. The offset is calculated by multiplying the grid size of the grid by two and the result from this will be multiplied by the grid scale.

I found a site that explained the right way to use the lerp function and I used this code to fix my lerp issues. The site describes that instead of a random number being used as time input that it is better to see this time input as a percentage of how far the lerp is done. By calculating the percentage and using this percentage as input I can get a smooth rotation and movement of the camera(BlueRaja, 2014)

I have severely underestimated the difficulty of this project. I did not think that I would have so many problems with the configurations and all the mesh combinations. Before this project I had the idea of making this into a tool or asset for other developers but during the making of this project I quickly noticed that I would have no time for that. I also regret not being able to understand the wavefunction collapse algorithm well enough that I could implement it within my time limit. At this moment I still do not have an idea on how I would implement it. I also do not really like it that my project is not really scalable. If I wanted to increase the different variations of possible configurations I would need to do this manually.

I am proud of the way that I solved the problems to create what I have at this moment. Thinking about ways to solve problems during this project without using other peoples code was refreshing. It made me enjoy writing the code I wrote. It also showed me that I can use the knowledge I have build up during the previous semesters to solve my problems without using other peoples code or exact tutorials.

The final product is a good addition to my portfolio and I am happy with how product functions in the webGL build.

If I want to expand this procedural building generation without having to manually update the configuration lookup table I would need to use the wavefunction collapse algorithm. This would take away a lot of manual work that is currently required to edit or expand the current lookup table.

Another thing that I did not do is to make this project be usable for other developers as a way of creating buildings. An expansion to my current work would be to make it work as a functional library or unity asset.

Something that can be improved a lot are the meshes. Currently they are very simple shapes that do not really represent actual buildings. I am not an artist but I also did not put a lot of work into making the different meshes look better than they are right now. 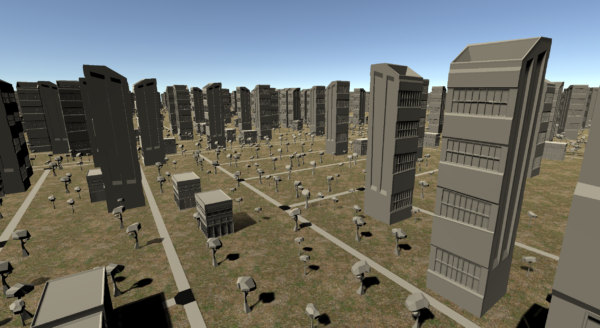